Today marks my 6 month anniversary of being married 🙂

Since that day a lot of things have happened.

That also means that I have neglected sharing pictures of the wedding for 6 months… So without further ado here are some of my favorites from our special day (fair warning, I am a crier):

I spent the night before the wedding (Thanksgiving) at my parents house. My sister also spent the night. It was something I wanted. A final night as just the Shelton clan. My dad, who abides by a strict bedtime, even stayed up late while we chatted and I painted my nails 🙂 The following morning (my wedding day!) I woke up and decided I should take a selfie of myself waking up. The following is the result… after multiple attempts. #iwokeuplikethis #isuckattakingselfies 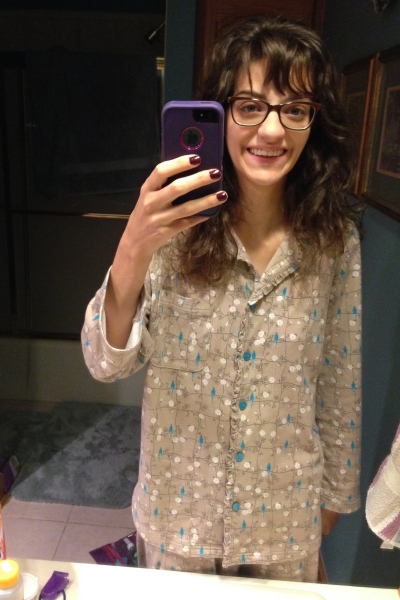 After this lovely picture I proceeded to the kitchen to eat a delicious breakfast and drink mimosas. Overall the morning and afternoon were good. I was relatively calm and collected. That was until I was getting ready to leave the house. A situation of a late florist sent me into a tale spin of tears because I freaked out I wasn’t going to see my dad before I left.

David and I had planned a reveal before the ceremony. We got married at an old house that has been converted into a restaurant and we knew we would be seeing all 11 of our guests before the actual ceremony. Before that happened we wanted a moment to have that surprise of seeing each other for the first time. 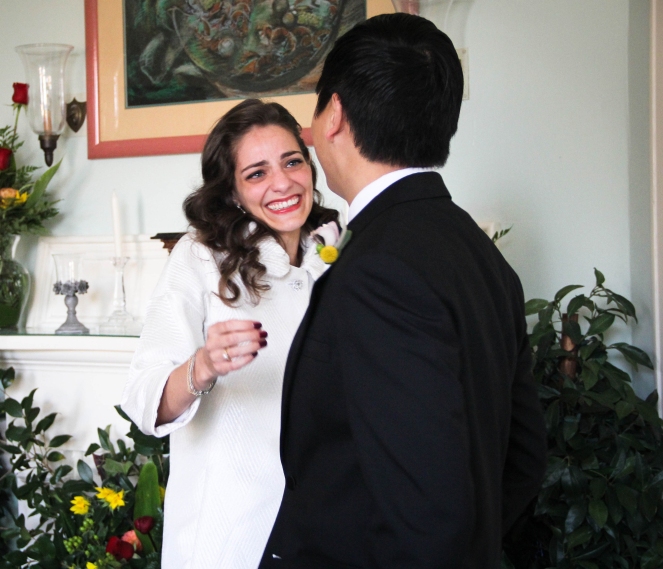 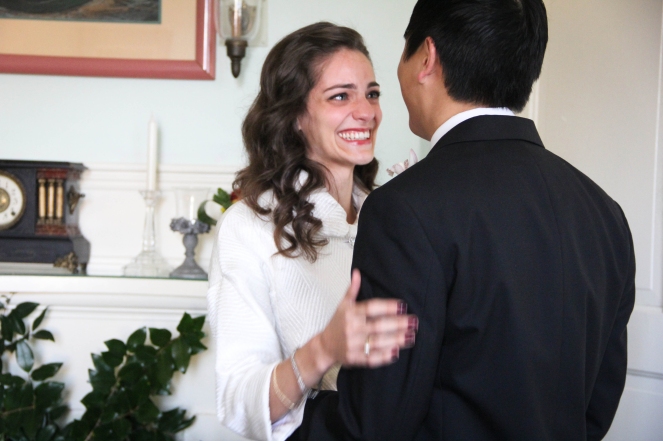 Once we had composed ourselves (me), we started talking with our friends and family that came. Below, is one of many pictures that our photographer captured of me with my 2 dearest friends having just girl moments. I love it.

I want to take a moment to talk about what I am wearing and the purse I am holding.

I made both my dress and my jacket. On such short notice I did not have time to make a full blown wedding dress. I was still adamant about wearing something I had made though. This is how I decided to wear this cocktail dress I had made a few years back, but I made this jacket especially for the wedding day. We had been having some cold weather and I am cold natured, so it seemed like a logical choice to make a cocktail coat that matched my dress. I embraced the vintage look of getting married in a suit.

Almost all of the jewelry I wore was borrowed from my mom. About a week before the wedding we had a jewelry play date. It was a special touch to be able to wear her things, one of which was an anniversary gift from my dad to her, on my wedding day.

The purse is a gift from my sister. She had it specially made for me to have a bit of lace, a bit of something new, and she put a penny inside from the year I was born, 1986- something old, and the lining was blue 🙂 To say I was a bit emotional when she gave it to me would be an understatement.

As I said, this was a small wedding of a handful of guests. There was no rehearsal and really no game plan as to how we were going to proceed. It was a last minute decision to have my dad walk me out, and I am beyond happy that he did. It was an incredibly special moment.

Now on to the actual wedding! These are some of my favorite pictures. We exchanged our vows at exactly the same moment the bells of the church down the street began to ring. The ceremony also took place at sunset. We were running late, but the timing ended up being perfect for these things to happen.

And for today, I will leave you with my favorite picture. I think it captures that moment of “We did it!”

I’ll be back with more picture of the after ceremony – it wasn’t really an after party.