This story is one that is strange to tell.

It started hopeful and ended with failure… sorry to blow the ending.

Several years ago, 2009 to be exact, I began a business. The business idea was simple, make beautiful clothes and sell them. How could it go wrong?!

Not being ready is the easiest answer I can give.

Now the story. At the age of 23 I took on the challenge of starting a business with a few friends. I was the designer, the friends filled in the other business roles, or at least that was the original idea.

We had a clear vision of each person’s role within the company, but we quickly learned that this would not work. A lot of times things do not work out as originally thought.  That’s life. And most of the time, they turn out way better than the original plan. This company is not one of those cases.

There were many mistakes made. MANY MISTAKES. For starters, we started this venture in the depths of the economic decline. On top of that we are in an area not set up to produce a high-end women’s clothing line. I thought big dreams and hard work were enough to overcome these obstacles. I was wrong. <– Take note of that statement, I don’t say it often.

The truth is that it is easy to blame circumstances and others for shortcomings in life. Had everything gone perfect I still do not think that business would have been successful. At the heart of it, I was not ready for it.

Even though thinking about that time is still a sensitive area, I now know it was important to go through. In those two years I learned more than any internship or educational curriculum would have been able to teach me.

I was able to get feedback from actual consumers. It helped to edit my eye for function and for what women really want. In essence, this failed business attempt is what has made me a stronger designer.

Strangely it also lead to my expansion into the interior field. Which is a big part of what I do now. Life is funny that way. It leads you. Working in the market of interior design was never something I had a desire to do. That was until I was working in it.

What I have considered to be a crippling failure for the past 7 years is something I am now trying to look at as a gift. Growth does not happen from success, it happens from falling and picking yourself back up.

I write this story at the beginning of 2016 not to be depressing, but rather, uplifting. Over the past several years, I have continued to fight that failure and have tried to forget about it.

I want to try a new approach for 2016. Accept that fall and try to rise from it.

Several of the designs I have already showed on this blog (like this, this, this, and what ended up being my wedding dress (pictures below)) are from my design line. I should be proud of that work. It has also given me a lot of leftover fabric to work with and create new pieces (spoiler alert: next week’s post). 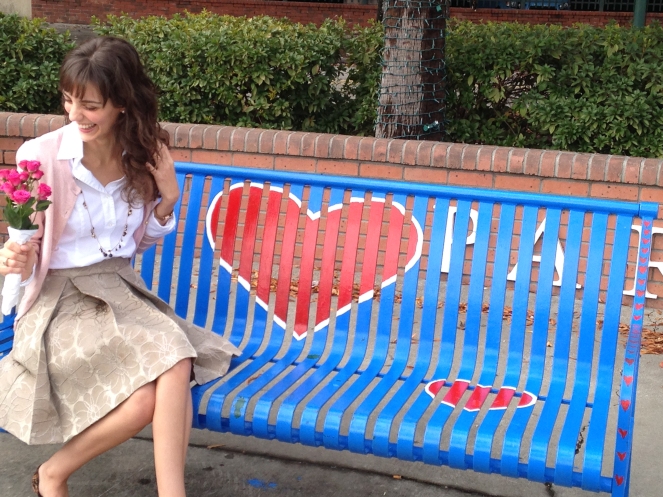 Since 2009 I have met a lot more people and become a lot more open to growth and opinions. Through that, I think I have become not only a better human, but a better designer. I am thankful for that.

Don’t misunderstand me, I still continue to struggle with the idea of failing. Type A personalities of the world unite! Knowing something to be true does not instantly change your behavior. However, I want to try letting go of the fear. It can hold you back from achieving great things.

When we need a little reminder, because we all will, may I recommend watching this? Ah! J.K. Rowling, you speak to my soul.

To 2016, a year of embracing possibility. Cheers!

4 thoughts on “A Tale of Design”